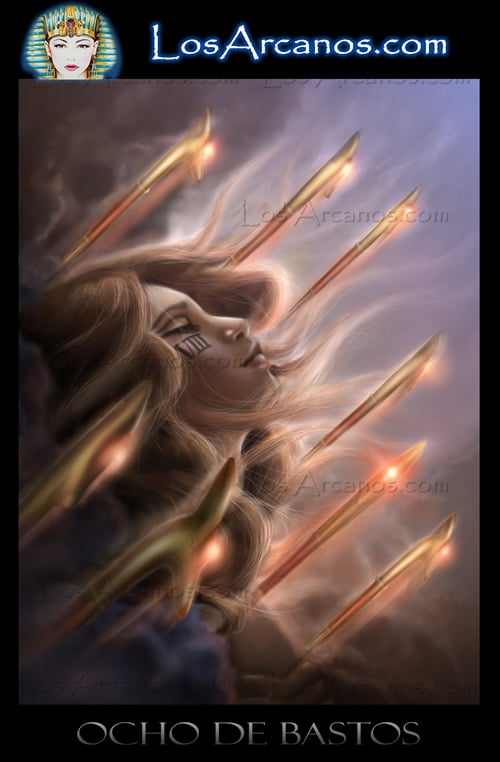 The Eight of Wands is often a sign that now is the time to declare. All items are ready and will work for you do not hesitate. The iron is hot, so it strikes! If the events are moving, they will proceed quickly. You may feel trapped in a whirlwind, but soon the dust will settle down and see how your plans have gone.

It is a symbol of the beginning of the action and its effects. Before acting, we think, imagine, speculate, talk and dream. This is the kingdom of air: the sky. So, finally, we decided to make our move. We bring our ideas to earth and put them into practice.

The Eight of Wands also represents the arrival of news or information. You can see or hear something important. The news could appear covertly, so stay alert. Pay attention to everything that is presented to you for a while.

This card also means endings. Sooner or later all the activities continue their course. The eight of wands on this card not only symbolize moving events, but also close them. They seem to be finishing their flight down to earth. If you see Eight of Wands in a reading, it may be time to finish what you've been doing. Celebrate the past, but be prepared to move on to something new.

Fire implies speed and movement. That movement sometimes does not have a clear sense like on this card, in which the start and end can be calculated easily and accurately. When Fire searches for, finds, projects and situations end with a happy ending.

Too busy, has no time, overtravels, restless everywhere.