The Moon Garden Tarot is a feminine, magical and romantic Tarot with a symbolic and mystical expression that reflects the elements of moon magic. 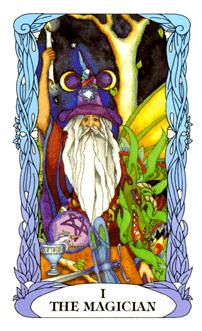 [I] The Magus, The Alchemist, The Prestidigitator Will, creativeness, adroitness, mastery, elasticity, autonomy, eloquence, craft, cunning. May imply a new beginning. The Magus is an autonomous person that knows where he is going and how to achieve its ends.